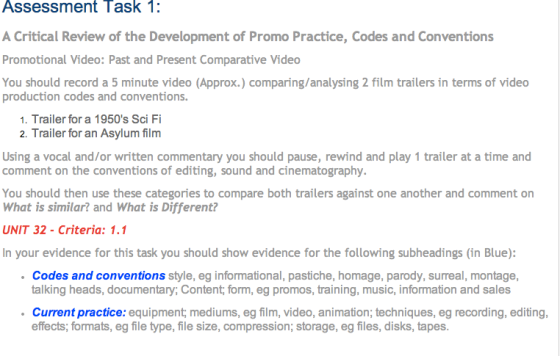 The Incredible Shrinking Man – 1957 Trailer: https://www.youtube.com/watch?v=vTIWloXBCww Mega Shark Vs Crocosaurus  – 2010 Trailer: https://www.youtube.com/watch?v=AqZlCWkH4P0 The thing in common these two trailers have is the genre, They are both very unrealistic but the film is set out to make them seem that way, the obvious difference in these trailers is the colour and the quality, In 1957 many films and t.v shows where in black and white. They both follow a parody sort of area. Another common thing in these two trailers is the music they chose to use, They both used action noises such as booms and bangs when it hits a climax in the trailer showing an important action in the film, such as when the Shrinking Man was attacked by a cat and the Spider, where as in Mega Shark vs Crocosaurus they used it mainly all the time. The budget for each film was around the $75,000- $1,000,000 The quality difference between each trailer is noticeable due to the equipment back in 1975 not being as well as it is in 2010 (when mega shark vs crocosaurus was released) The incredible shrinking man took much longer to make then Mega Shark VS Crocosaurus did due to the editing process being alot slower. In the Incredible Shrinking Man he is attacked by a spider which is Animated, As it says in the Trailer that the film is a “Animated film featuring fantastic special effects” Which during Mega Shark VS Crocosaurus the shark and crocosaurus is obviously animated which takes a difference on the special effects from The Incredible Shrinking man which look very realistic. The Difference in the films also is the technical aspects which are as shown: This one being “The Incredible Shrinking Man” – 1957

Which show the differences being, A more up to date camera being used in 2010 but the negative formats stay the same. The techniques used in each film show how the media has changed in the years.

in 1957 the cameras required tape whereas in 2010 most cameras would run on memory cards producing a better quality than what tapes would.

Melmane Shake
Create a free website or blog at WordPress.com.