As we were given the task of writing, directing and producing our own film, I wanted to think of a number of different ideas to use for this project. We were all tasked of making a film of what we wanted. We could make any story and any genre. I liked this because we hadn’t been given a previous project where we had so much freedom to make a film. As we were given the choice to pick our won genre, I decided to plan and make a horror short film. Horror Is probably my favorite genre and this was my chance to do something I wanted to do.

Although Horror is my favorite genre, I felt that a lot of Horror films were predictable. The reason I thought this was because horror films today seem to rely on ‘jumpy’ scenes to scare the viewer. I wanted to make something different and make the viewer feel uncomfortable with what there watching but I wanted to build up the tension rather than throw it at the viewer all at once. Although it will challenging building up that kind of tension in a short film, I feel that it can be achieved and have an effect on the viewer.

I decided to base my story off an old horror story, the story is- “The last man on Earth sat alone in a room. There was a knock on the door…”.  The reason I chose this story was because I felt I could create the tension I wanted for this story. This story is the basic plot of the film ‘I Am Legend’. Except in that film, Will Smith’s character is against a world of zombies and he is humanity’s last chance to save them. For my story I wanted to completely focus on the one character who is alone in the world. I want to express how lonely and desperate he is in the situation that he’s in. He wants to give up on life but for some reason, he decides to keep going. I want to make the ‘knock on the door’ unexpected for my character and the viewers as well. In my film I what to show his emotional stages as he goes through everything that’s happened to him. I might put in some flash backs to show what he did in his life before to add more of a dramatic feel to it. As the story goes on he accepts what has happened and he tries to survive on his own. Once he has truly convinced himself he is the last man on earth, he notices little things that suggest he’s not alone. Such as an item which has been moved in his ‘den’. With these little suggestions, it builds up the tension. He keeps having to remind himself that he is completely alone and he thinks its all in his head. Once he establishes this, there’s a knock on his door. He’s clearly both shocked and scared about this. He hesitates and doesn’t know whether he should open the door.

I could change the ending to a more “thrilling” sort of area:

He hesitates after hearing the knock and is unsure whether its really happening or not. He has mixed emotions and slowly walks towards the door, he could have voiceovers in his mind about whats going on, he ‘s think of the pro and cons of the situation while he’s walking towards the door. There’s another knock, this one much louder and more frightening. He looks terrified now but still has the urge to know who or what is knocking on the door. He opens the door and there’s a blinding light and he shields his eyes. The light slowly fades and gets dimmer. He opens his eyes, he shows true fear and what he’s seeing or he could have a sense of relieve on his face.

I would like to film this in urban areas. I like the idea of filming this in isolated buildings. I want to base the surroundings from the tv show ‘The Walking Dead’. Although I couldn’t make the outdoor scenes like they did on the show, I can certainly film in some hallways and make them look isolated. I can also film some dark scenes in the college studio as that would have a nice effect.
My current actor has been growing out his hair and beard for a “rustic” and alone sort of feel. 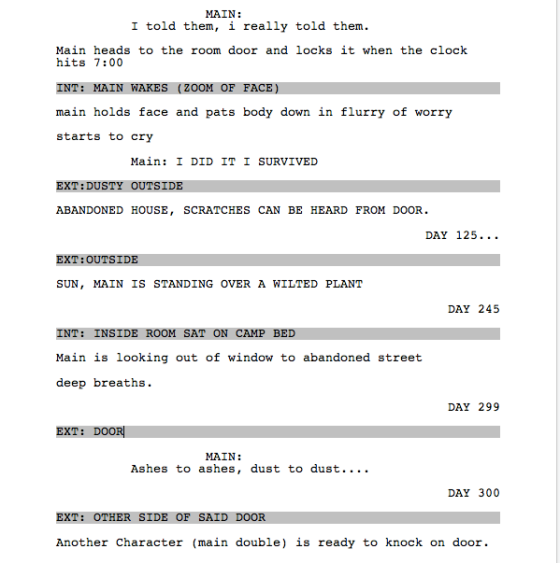 Draft:
Dialogue.
in my draft I only aim to have one line of dialogue this being
“I SURVIVED”
I aim to make the shots and Transitions create the scene and the feel.

As for the sounds I aim to keep them to a minimum, and only have sharp violin solos and Heartbeat sounds.

I aim to possibly change this as i go along and when i get on set, to hopefully bulk out flash back scenes.
My script and my proposal are in two different ways, As I believe i want my story to have a rough horror, theme with more of a thrilling ending.

The Marketing and Commission Process for Scripts is a simple three step process to begin with,

It starts off with a script writer (or budding professional) with a script they have written themselves and believe is ‘television ready’, once they believe it is ready, they find an Agent (who can be found through the writers guild of great Britain) once they have the Agent they will then find a Commissioning Operator these being e.g BBC, ITV, Channel 4.

This traditional motion is changing more and more each day due to more channels coming out and these different channels have different ways or ideas of finding scripts.

Prime example is SKY, They have their own TV box (Sky Box) which includes its own channels, They often advertise some channels as (SKY ONLY). Sky Movies, Sky news. Sky Entertainment.

Another way of this is how NOW TV has its own physical box but can also be accessed via xbox, chrome cast etc.

Amazon studios is a another prime example for commissioning of a working script,

Amazon has two separate processes for features and TV. Features has a whole storyboard process that happens online and things move forward based on audience response, Amazon will do what other online streaming sites will do and commission one season and continue that onwards if the audience response is vast and worth the second season.

Netflix only buys fully packaged material ( script, show runner, director, actor), Netflix will also online commission one season and commission the second once the audience response is positive enough, they will release this during the year.
Netflix is popular for buying directors instead of just shows. such as e.g Orange is the new Black was commissioned for a 3rd season by netflix buying the directors for the episodes.

Competitions such as enter the pitch and zoetrope also commission scripts/stories to be made into films with budgets. Competitions allow for anybody to prove to them they can do it, Entering competitions means your idea will be out there and people will find it where as submitting to places such as “amazon studios” your work will not be made public, Competitions such as Enter the Pitch will give you personal feedback and support you through your idea and keep you in the loop.

When entering competitions you also don’t have the option of using an agent, you are you’re own agent persay.

As there are many options in order for you to get your ideas out, the most useful I find is the BBC ONLINE WRITERS ROOM, personally they include alot of pointers and tips, they also have inspirational quotes on the website which are nice to read.

They also include the Writers Lab where they can assist you in writing you script before submission, they also give you then option of downloading successful scripts from producers for tips.